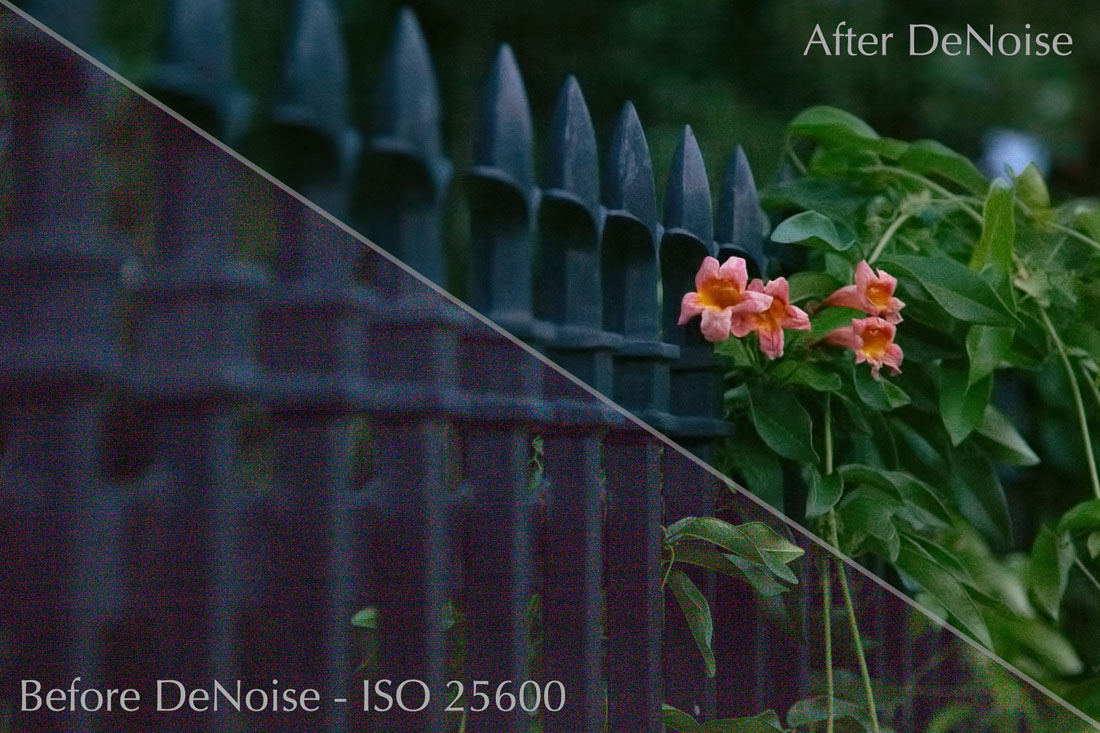 I have had for a few days now Topaz DeNoise 6 which was released for sale on 25th February 2016. It is available as a standalone program or as a plugin and for Windows or Mac. I have used Version 5 for many years and as with all Topaz software all upgrades are free. If you do not have it DeNoise is the best software around for removing Noise from images without losing detail.  It is worth taking a look with a free 30 day trial. See Topaz Labs DeNoise 6

IMPORTANT Does not support Windows 32bit

New for this version is that Topaz DeNoise 6 can be used as a standalone program not needing any other program. Just drag and drop an image into the program window to get started.

Alternatively DeNoise can be accessed as a plugin within:

• Lightroom 4+ or CC as an external editor

I would strongly advise taking up the free trial to make sure it works on your computer. However if you are looking at this article before 20th March 2016 be sure to diary up 20th March  for a decision on purchase to get the $30 introductory discount. Normal price $79.99 and offer of $49.99 with the voucher code NOISEFREE. One point to note is that as with any image editing software it will work better and faster with a high quality system.

So when are you likely to need Noise removal software. First in a low light situation either indoors or at night where you cannot or are not allowed to use a Tripod. Here you will have to increase ISO often a lot to get a fast enough shutter speed to avoid camera shake. Second even if you use a tripod if your subject moves you will need faster shutter speeds and you may have to use a higher ISO to get it. Subject movement will be magnified with a long lens or using macro and to get a perfectly sharp shot you may have to increase ISO a lot. Bear in mind that though your camera may be able to reduce noise there are limits and also it does it automatically, not under your control. At higher ISO settings your camera may lose detail in getting rid of noise. It is better to turn off noise reduction in your camera if the settings menu permits and deal with noise in software.

So let’s have a look at the software. The images below show part of an image of a spiral staircase showing the presets on the left and the adjustment sliders on the right. The first image is shown with noise and the second image after noise removal. 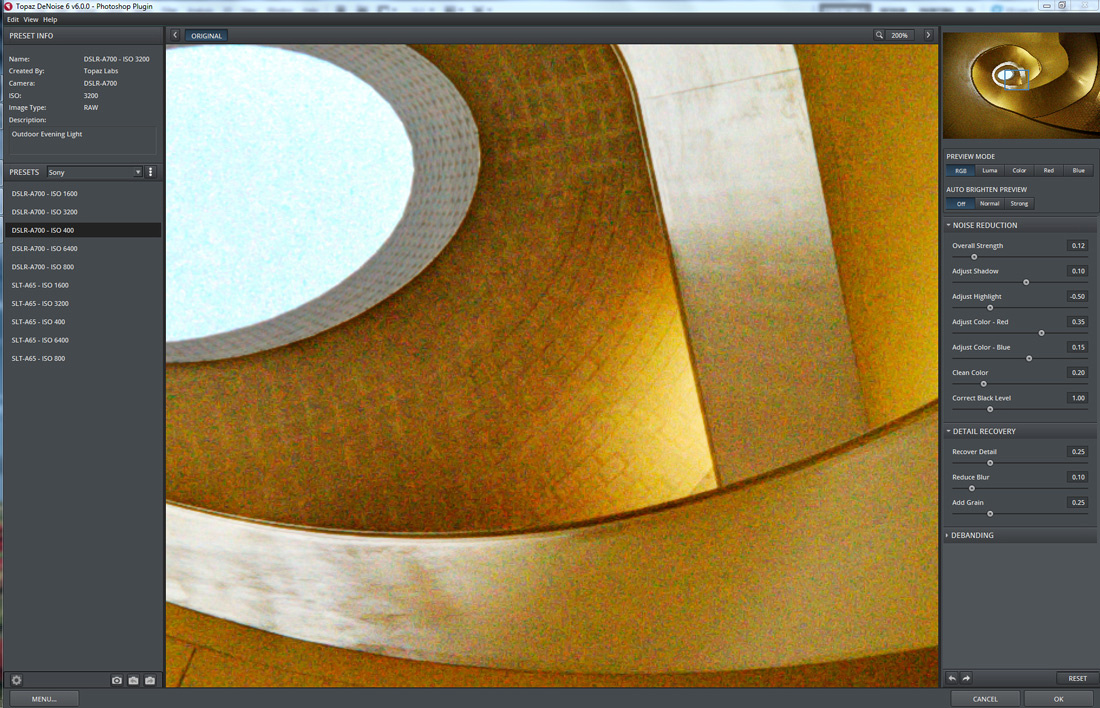 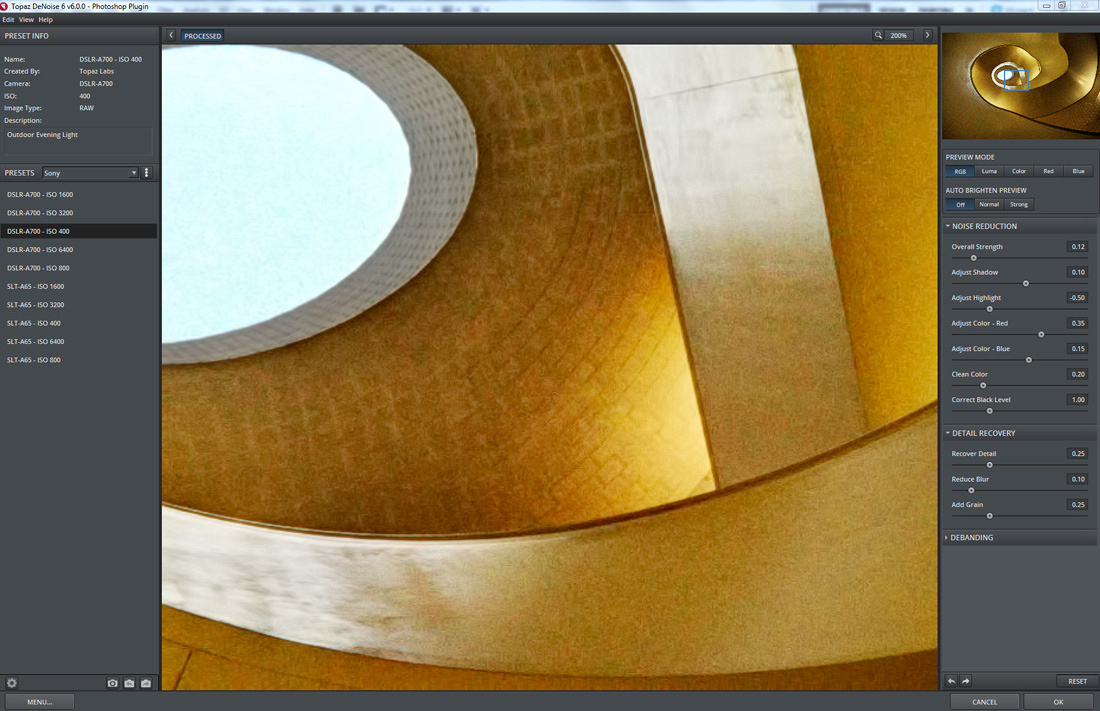 Next lets look at the controls available more closely. On the left as seen in the next picture we see the panel with the various presets. You can choose your own camera make and model and the ISO setting closest to the one you used for the picture being edited. If your camera is not there you can instead choose from the dropdown DeNoise 5 Presets which are the more general presets used in the previous version. 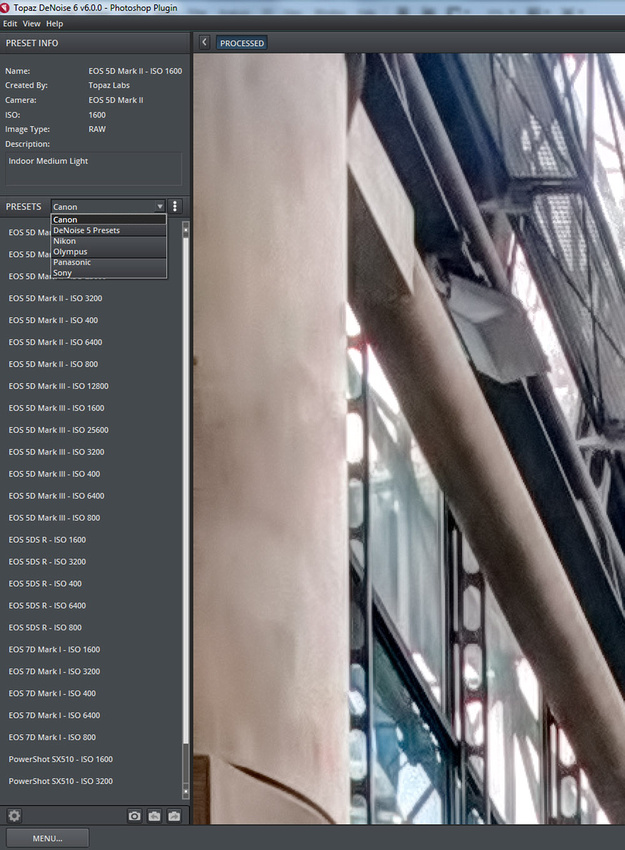 You can toggle between the original image and Noise removed in the program by clicking PROCESSED in the top left of the image in the panel which will then change to ORIGINAL to quickly see the effect. If say you decide that the preset using the pictures ISO takes out too much detail click on another ISO Preset. A lower ISO preset will remove less noise and less detail. Alternatively go to the DeNoise 5 presets and find one to suit.

For the maximum control use the sliders on the right in the Program Window as shown in the next 2 images especially the ones for Overall Strength and Recover Detail to fine tune. Most of the time those sliders will do it but with a few pictures you might use some of the others. Also at the top of the panel in the Preview Mode you can view the noise in individual colours rather than the combined RGB 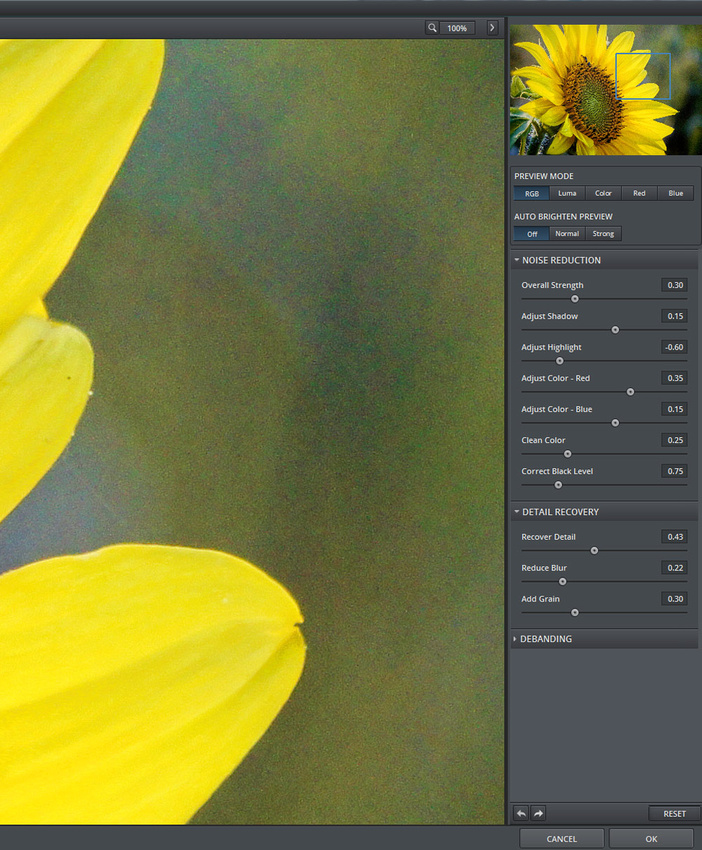 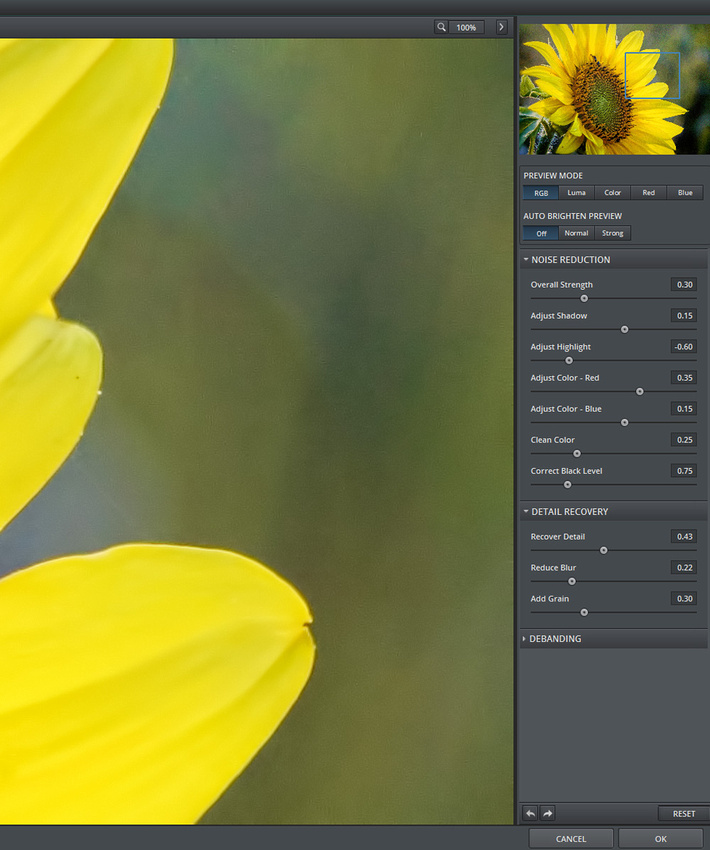 Those who read my Blog or the details given with my Flickr pictures will know that I use Topaz plugins a lot. There are now 16 Plugins available which can be bought all at once as a collection or individually. I bought the bundle a couple of years ago but the ones I use the most are in order Topaz Adjust, Topaz DeNoise, Topaz B&W Effects, Topaz Clarity and Topaz Lens Effects. Unlike some other software Topaz provide all updates of software you buy for free. For the DeNoise 6 program see Topaz Labs DeNoise 6

Note that free trials are available for any of the plugins.

NOTE - Fair disclosure. The links on this page are affiliate links which give me a small commission if you download a free trial after clicking one of the links and then decide to buy. This is done to help meet the costs of keeping this Website going.