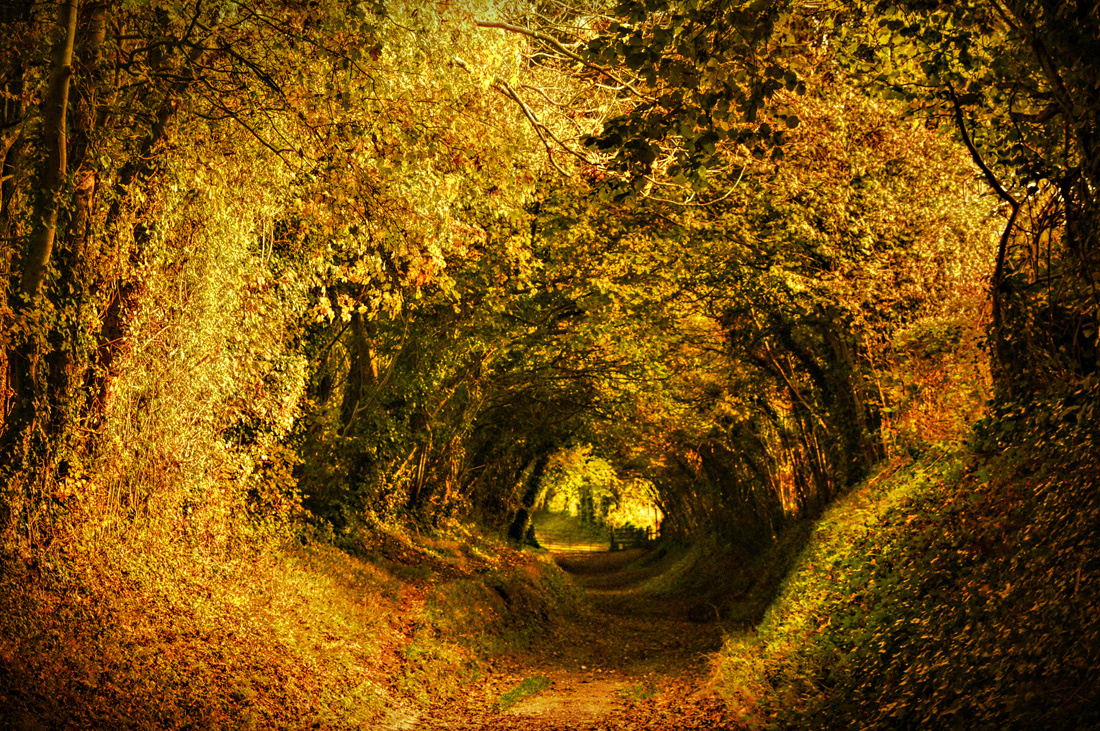 I have had for a few days now a Review copy of the latest software from Topaz which is Topaz  Texture Effects released for sale on Tuesday 10th November. It is available as a standalone program or as a plugin and for Windows or Mac. I really like discovering software which can create amazing effects in minutes rather than the hours it would take to do the same in Photoshop. It is worth taking a look with a free 30 day trial. See Topaz Labs Texture Effects

IMPORTANT Does not support Windows 32bit

Texture Effects can either be used as a standalone program or can be accessed as a plugin in:

• Lightroom as an external editor

• NOT compatible with Fusion Express

One point to note is that as with any image editing software it will work better and faster with a high quality system. I have no problems but I do have 16GB of RAM.

If you dislike anything stronger than mild processing of photos the effects can be dialed down substantially using opacity settings. A very useful feature is a brush tool when you get to editing the effect. This allows for quick masks to remove the effect from part of the picture. Another method is to use opacity of the layer you apply the effect on if your program has layers..

Rather than use the standard Topaz Press images for a demo I decided to play around with some of my own images. All the editing was done just using the standalone program. The main image I tried it out on was taken a few weeks ago at a pathway under a tunnel of trees. Another of my images image taken at the same location but looking in the opposite direction was shown on a local TV Station and after being chosen as their Facebook Cover Photo for a week gained 9000 likes. The first image shown below  is the original before any editing. 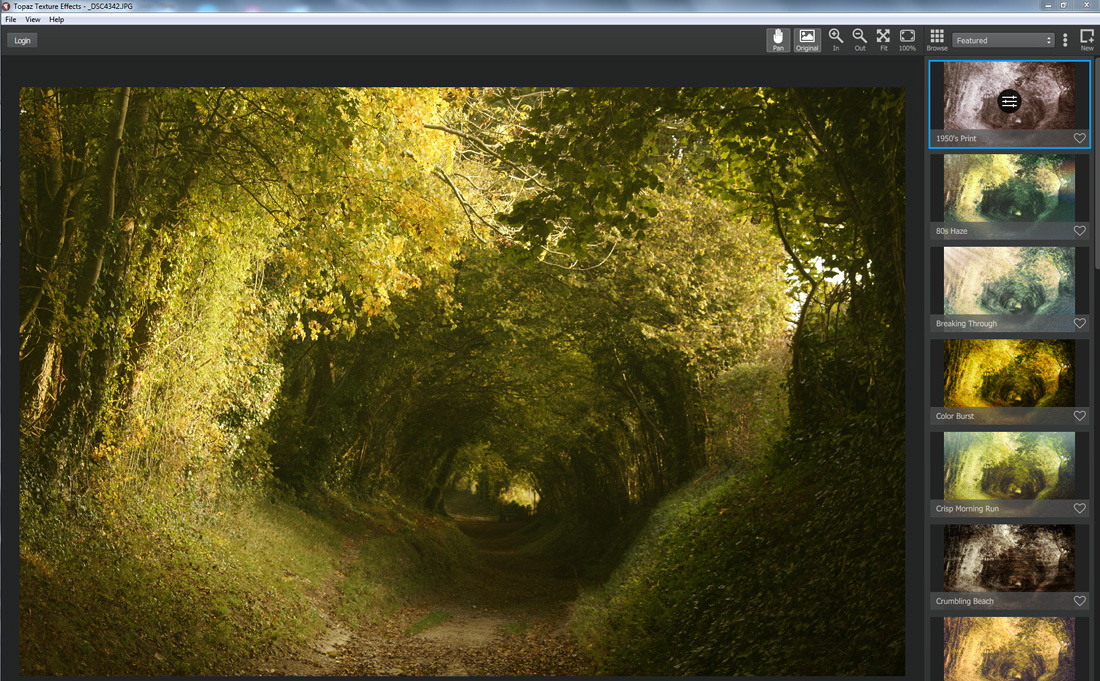 In the following picture the main screen is shown. I have selected one of the 150 presets which is called Colour Burst. An alternative to the built in presets is to click Browse in the top right menu to get  one of a growing category of Topaz Community Effects. See the following image for some examples which come up in a grid view. 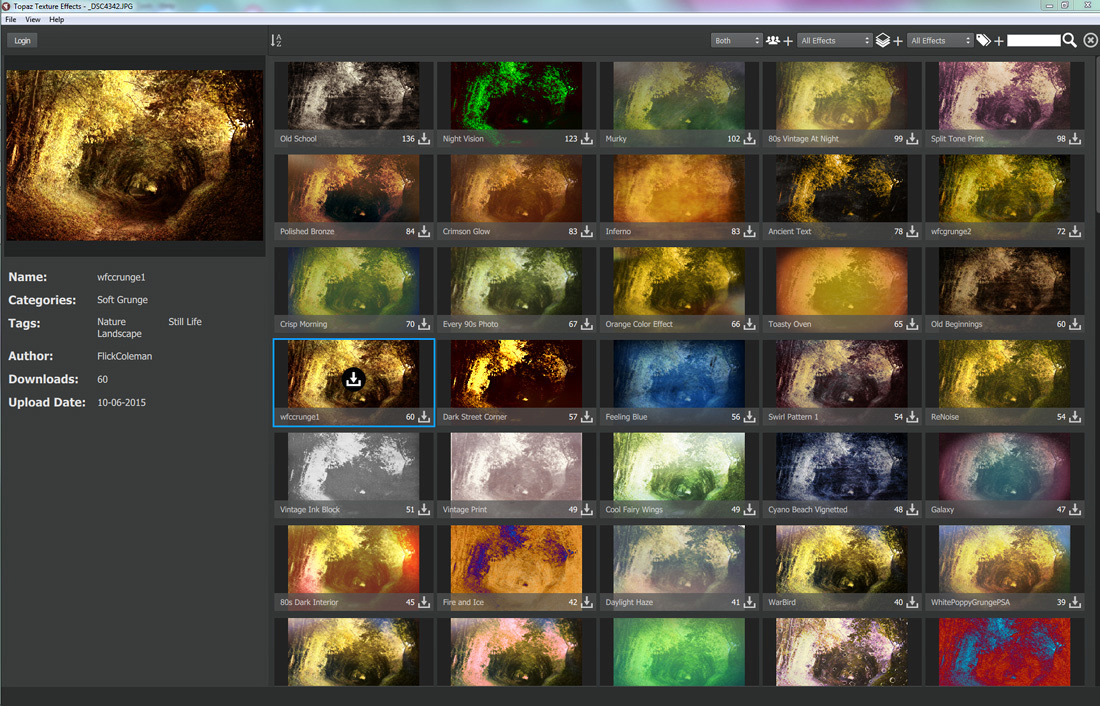 By clicking the box with lines in it in the preset preview you are taken to the Adjustments in a column on the right. See the following image 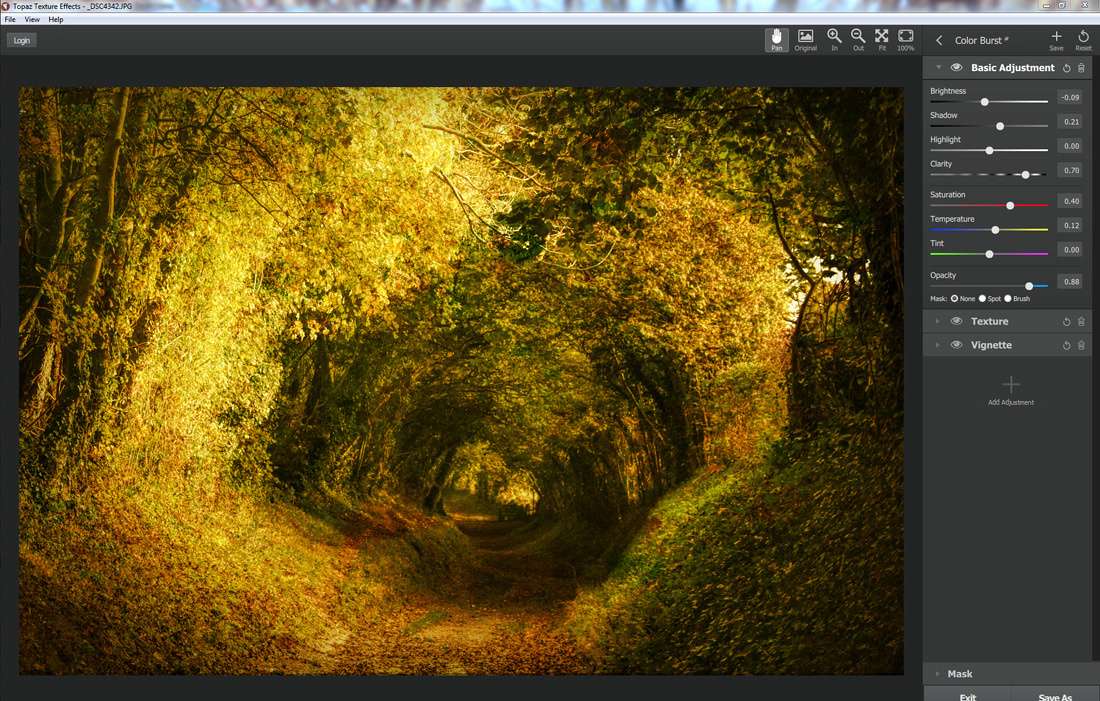 Each preset will load with a different set of adjustments depending on what has been used to create the preset. In the image above see for the Colour Burst preset that Basic Adjustment, Texture and Vignette have been used. All of these can be amended to suit. Looking at the top right you will see the name of the current preset. To change to a different preset as a starting point click the arrow to the left of the preset name to go back to the preset list. To remove an adjustment click the bin icon next to it. Probably a better way though is to select the adjustment and just slide the Opacity down to zero in case you decide to use it later in the editing.

Click Add Adjustment to add another one to edit. See the following image for the possible options 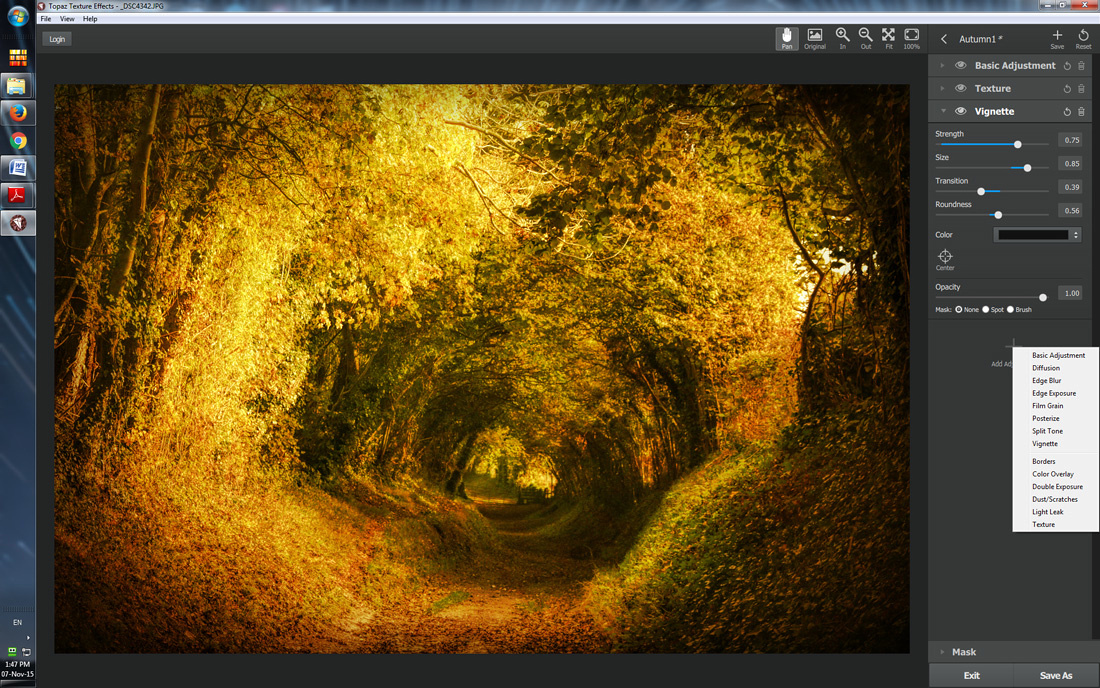 The next image shows the editing screen for the Texture. 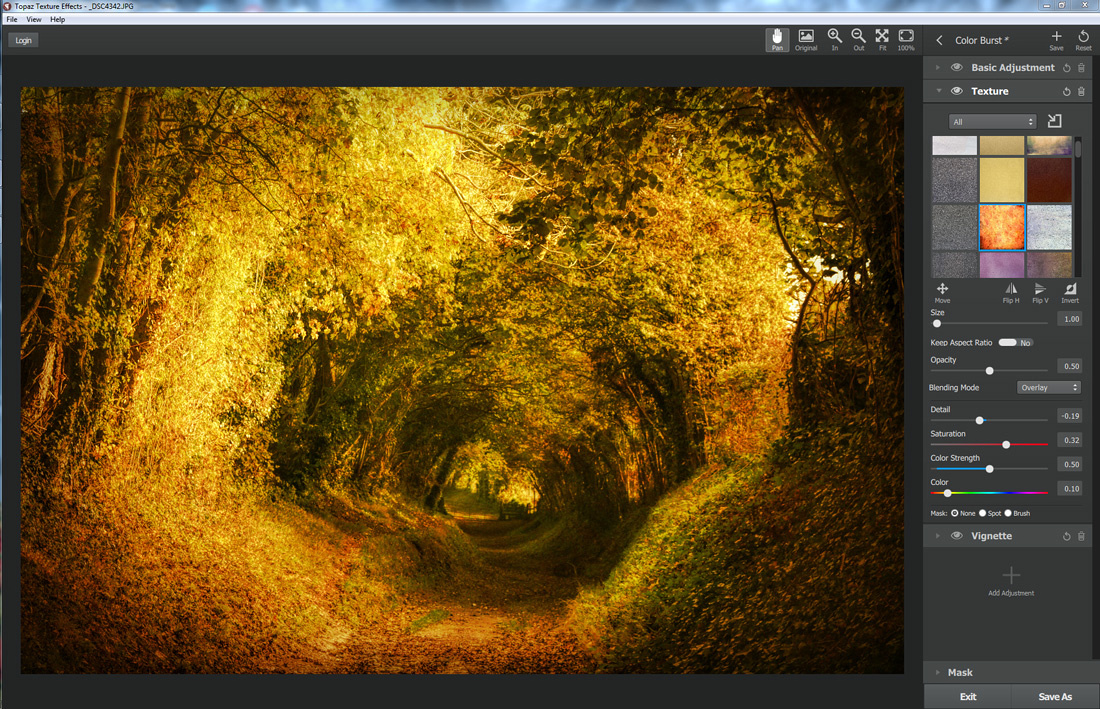 There are 275 high resolution Textures included in the program. If you are not happy with the texture used  in the preset just click another one and see the effect on the image.

A very useful feature is that you can also add your own texture. See on the above image above the preview of textures it says all and next to that is a box with an arrow. Click that and in the pop-up window you have the option to import a texture.

When you are happy with all the edits and think you might want to use your edited effect again click the Plus and save in the top right to save to My Effects. See the following image 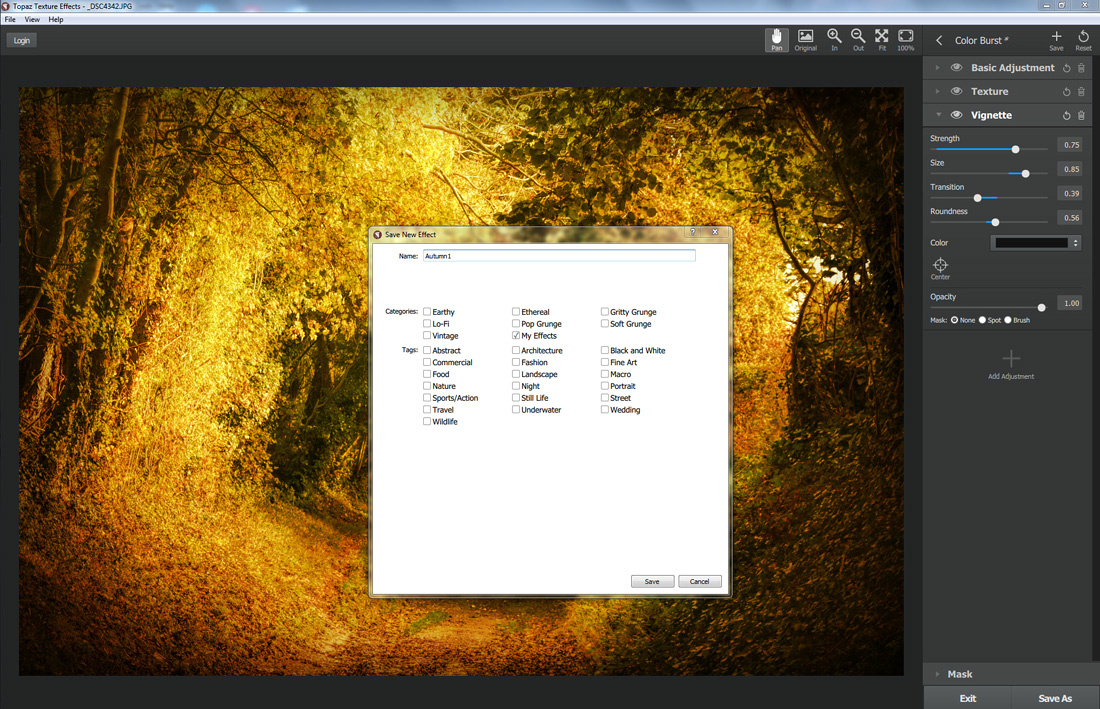 The image was finished off in Photoshop with a crop and then clone tool to remove the distracting highlight on the right. See the finished image below.

Below are a few more examples using different types of images, first some flowers, then an interior and finally a skyscraper. 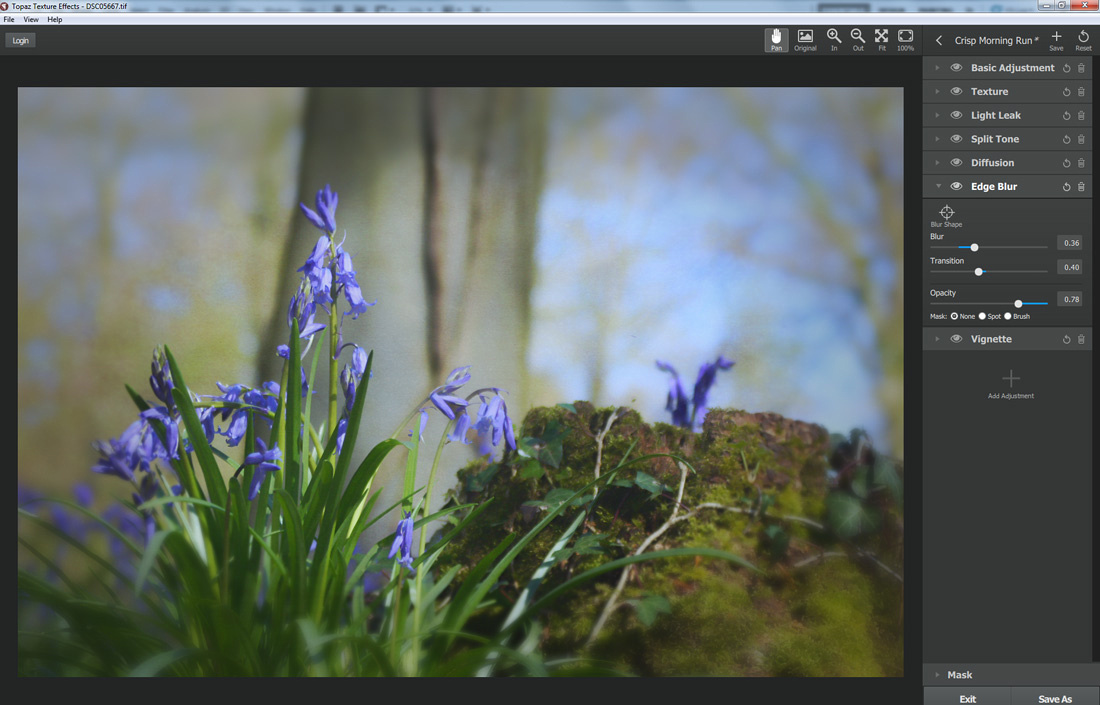 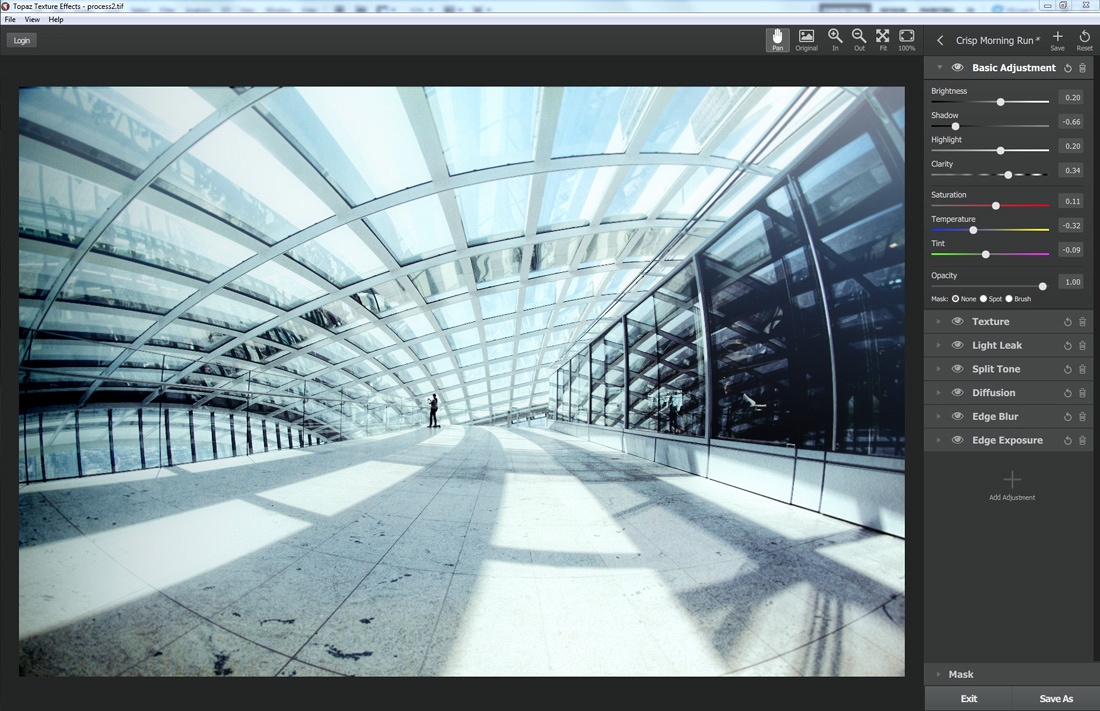 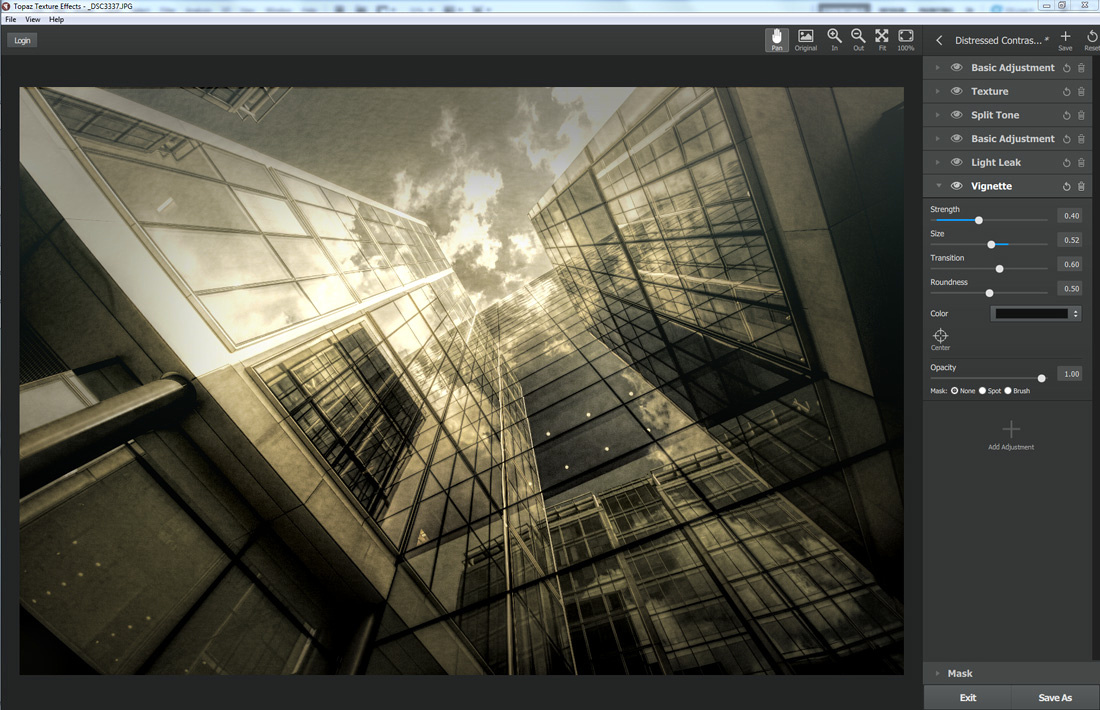 Those who read my blog will know that I use Topaz plugins a lot. There are now 16 Plugins available which can be bought all at once as a collection or individually. I bought the bundle a couple of years ago but the ones I use the most are in order Topaz Adjust, Topaz DeNoise, Topaz B&W Effects, Topaz Clarity and Topaz Lens Effects. Texture Effects is likely to be added to that list of my most used plugins. Unlike some other software Topaz provide all updates of software you buy for free. For the Texture Effects program see Topaz Labs Texture Effects

Note that free trials are available for any of the plugins.

NOTE - Fair disclosure. The links on this page are affiliate links which give me a small commission if you download a free trial after clicking one of the links and then decide to buy. This is done to help meet the costs of keeping this Website going.